Anyone who is committed to living out their faith knows that sometimes are easier than other times. There are times when God feels close, often called times of consolation, and there are times when God seems distant, often called times of desolation. While ups and downs in the spiritual life are normal, it is important to know how to recognize the causes and be able to navigate through times of desolation. This short response aims to explain how to remain on the spiritual path when God seems distant.

God, who is all loving, never turns away from His people. His grace is always being poured into the soul as long as the soul doesn’t reject it through sin. Yet God, in His infinite knowledge may decide to shield the rays of His love from a soul for a while, making it hard to recognize Him because He knows this will ultimately lead us closer to Him. This spiritual crisis is often called the dark night. In the dark night God permits a soul to feel no emotional satisfaction or consolation in prayer. By removing the consolation God purifies the soul leading it to an ever closer relationship with Himself. Through the dark night God purifies the individual soul so that it seeks not worldly or selfish needs, but only true union with God. Since God only gives His people what they can endure, this dark night usually only comes after the soul has an established a deep relationship with Jesus Christ. Many of the great saints including Mother Teresa, St. Theresa of Avila, and St. John of the Cross experienced a prolonged dark night, which they viewed as a gift from God because they understood, not only its purifying power, but also their close intimate relationship with Christ. They knew, after proper discernment, that their dark night was a gift from God, and that the infinitely bright light of perfect union with God was about to break through.

While the dark night can be permitted by God for the good of a soul, people should not jump to conclusions that their desolation is in fact the dark night. Since prayer is relationship with God, the desolation can be caused by God or by the human being. Each human person is created by God with a body and a soul that is intimately united to each another. The actions of the soul deeply affect the body and the actions of the body affect the soul, so the times of desolation can either be rooted in the soul or the body.

Since prayer at its core is, union with God, the way a person lives his life effects his relationship with God. Sin, the rejection of God’s love, turns a person away from God and can be the cause of desolation in his life. While a mortal sin immediately cuts the soul off from the body of Christ, even venial sins cause a rupture in one’s relationship with God. Desolation is most often caused by a wounded relationship between a person who has committed many venial sins or by a person who has cut himself off from by the Body of Christ through mortal sin. The first step for anyone who feels abandoned by God must be to humbly admit that he is probably the cause of that separation and he needs to make a serious examination of his life and go to the Sacrament of Confession.

Created with a body and soul that is intimately connected, what affects the body often affects the soul and can lead to moments of desolation. Sickness, added stress, an unhealthy lifestyle, bad habits etc. not only effects the body but also the soul, because what is bad for the body is bad for the soul. For example if someone is suffering from exhaustion, they may attempt to pray, but their exhaustion will keep them from feeling any connection to God. Thus anyone who feels that God is distant should look at their lifestyle and see if there may be a need to a lifestyle change to allow them to more perfectly commune with God.

Even after one has prudently discerned what may be causing the desolation and begins to make necessary changes like going to confession or reducing stress, the desolation may remain for a period of time. Regardless of the reason for feeling abandoned in prayer it is important to continue crying out to God. The temptation of someone in desolation is to pray more or to undertake a greater penance, but St. Ignatius of Loyola counsels against this, arguing that the person should focus on being committed to the spiritual practices that were already in place before the desolation began.[1] The ultimate key to enduring times of desolation is patience. Having made a prudent discernment, often with the help of a spiritual director, that the individual is free from sin and from other physical distractions he should place his complete trust in God and proceed with his spiritual practices knowing that God is sustaining the soul even in the darkness.

2 thoughts on “HOW TO OVERCOME TIMES OF ABANDONMENT” 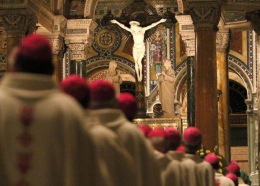