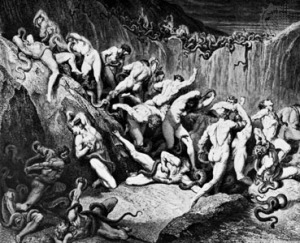 Most Catholics, following the teaching of the Catechism of the Catholic Church[1]accept that hell exists. Yet some Catholics hold that while hell exists it could very well be the case that no human beings will end up in hell. While the Church never condemns anyone to hell or definitively teaches that anyone is in hell, there is good reason to believe that hell is populated and even better reason to live lives acceptable to the Father so as to merit eternal life in heaven, rather than resting on one’s laurels trusting no one is in hell.

Some theologians who hold that it may be the case that no one is in hell appeal to the greatness of God to support their claim. They argue that God, being all-loving and merciful, will see to it that no human being ends up in hell. God certainly desires that all men be saved[2] however this position fails to take into account the freedom of man. While God desires all to be saved He made man with free will so he could choose to spend eternity with Him. While we are made for communion with God, we have the ability to break that communion and thus choose to go to hell, whose chief punishment is “eternal separation from God.”[3]

Other theologians accept the reality of the existence of hell based on the teaching of the Church and the many passages of the bible[5] yet still hold that it may be the case that no human beings will end up in hell. They hold this position by arguing that these scripture passages are “threat discourses” and not real indications of what the future will be like for man.  While this is a beautiful thought, it simply does not conform to reality and this line of thinking does not follow proper biblical study nor does it conform to reality.

The Church is clear that the bible is not necessarily intended to be taken literally,[6] yet this does not mean that the literal text is to be ignored.  When a theologian does exegesis on a passage he is to draw out truth from the text and not add to the text. The claim that the teachings on the existence of hell are only a threat is not mentioned anywhere in scripture but is added on from the outside by theologians. In fact, when one looks at Sacred Scripture one sees the opposite, namely that when God offers a “threat” he follows through. In the Old Testament the flood is foretold and comes. The coming of Christ is also foretold in the Old Testament and comes about in the New Testament. In the New Testament Christ foretells of his passion, death and resurrection which come about. Simply put, when something is foretold in the bible it comes about. Following the pattern of the rest of Sacred Scripture, it makes no sense to claim passages about hell in the bible are just threats.

The Church is very clear on her teaching concerning the existence of hell. Catholic theologians accept the reality that hell exists, yet many try to argue that while hell exists, it might well be the case that no humans will end up in hell. While all Christians are called to hold out hope for the salvation of all people, the arguments put forward to claim that it might well be the case that there is no human person in hell simply do not hold up. Hell is a reality and we should continue to work, with God’s grace, to choose communion with God rather than separation from him.

[1] “The teaching of the Church affirms the existence of hell and its eternity.” Catechism of the Catholic Church, 2nd ed. (Washington, DC: United States Catholic Conference, 2000), 1035.

[4] “this communion of life and love with the Trinity, with the Virgin Mary, the angels and all the blessed – is called “heaven.”” CCC 1024.